At a debate in London this week about the future of the European Union, I asked high-level politicians and senior academics:

Ex- Prime Minister of Belgium, Guy  Verhofstadt, who is now an MEP and Leader of the Alliance of Liberals and  Democrats in Europe, was first to respond:

The microphone was then passed to MEP Martin Callanan, Leader of the European Conservatives & Reformists:

She held up her hand to her face:

[Another  fact: Mr Callanan was definitely wearing socks coloured purple… or were they?]

Next Professor Simon Hix  asked for the microphone. He’s head of the department of government at the LSE:

Another  questioner from the audience got to the nub of the issue and asked Mr Martin Callanan, Conservative MEP:

A  nervous chuckle from Mr Callanan:

So  there you have it:

Where will the debate go from here? 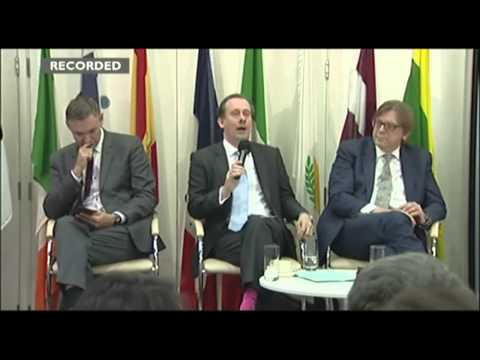 Read other articles by Jon Danzig: