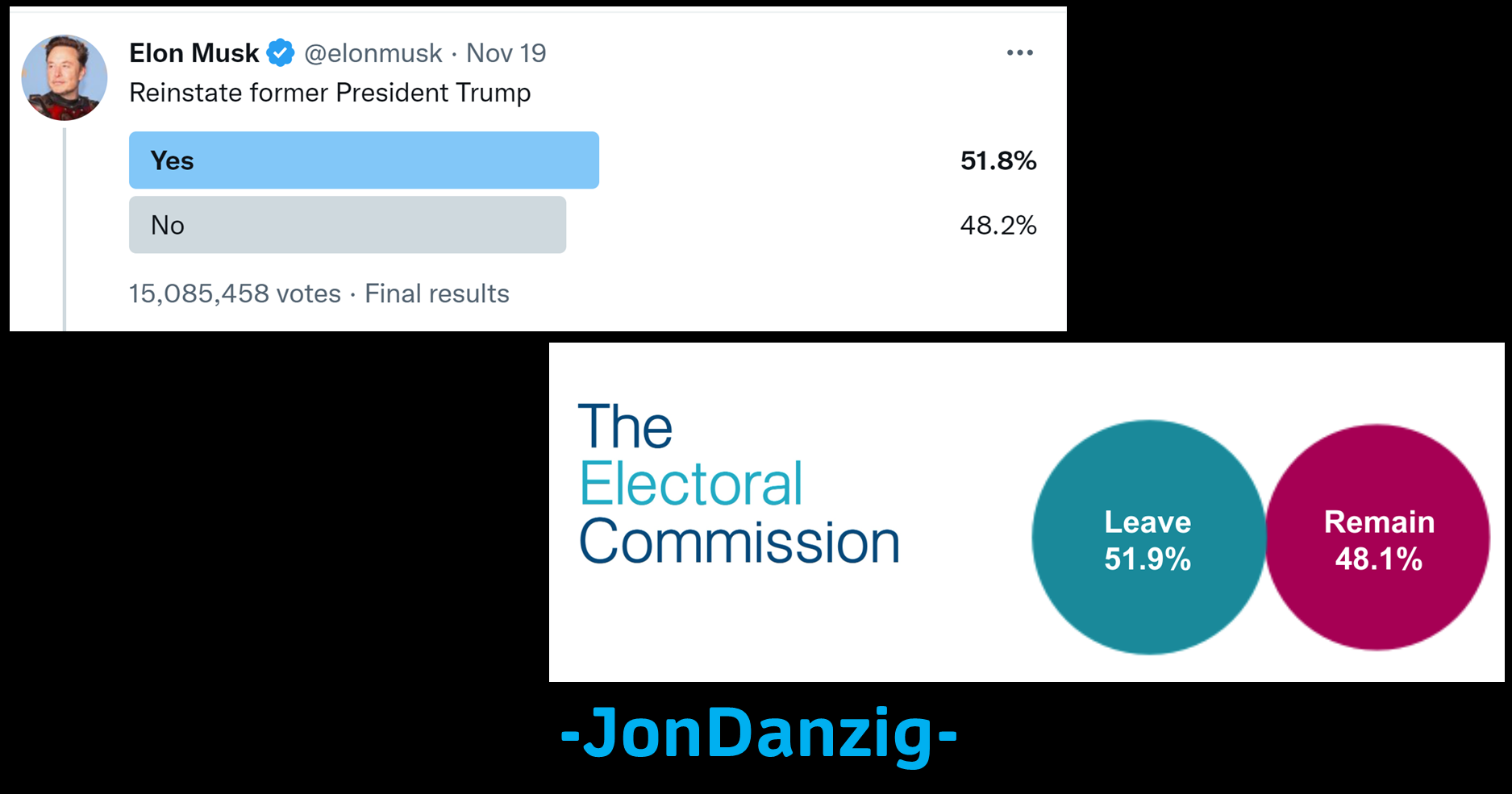 So, in a straw poll of Twitter users organised by the new Chief Twit, Elon Musk, Donald Trump has been ‘elected’ back onto the platform after being banned in 2020 for reasons we all know.

“The people have spoken,” tweeted Mr Musk. Haven’t we heard that phrase before, ad nauseam, since 24 June 2016?

Musk’s poll of ‘the people’ was hardly decisive – apart from the fact that, as admitted by Musk, ‘bots and troll armies’ affected the result. (Oh, haven’t we heard that before, too!)

That’s the problem with straw polls, or referendums, or plebiscites, or whatever you care to call them.

They are merely snapshots of a fleeting moment, only offering a simplistic ‘yes’ or ‘no’ answer to what’s often a complicated or tricky question, without any riders, provisos, conditions, or stipulations.

Sorry, that’s not on the ballot paper. It’s either yes or no. He stays out or he comes back. It’s one or the other. No what ifs, no get-outs, no debate, no wriggle-room. It’s in or out. Get it?

Oh, should we leave the European Union? Yes, or no?

Don’t mess up the question with complications. If you answer yes to leave, then leave means leave. You don’t get options. You don’t get to qualify your answer.

Well, isn’t that just the problem? Straw polls, or referendums, or plebiscites, or whatever you care to call them, are lousy ways to make decisions.

Much better is to have people, or democratically elected representatives of ‘the people’, fully debate a complicated proposal, over many months if necessary, with extensive information provided, the proposal properly considered, together with numerous opportunities to revise, amend, or abandon the ‘decision’ at any time during the process.

A referendum, or direct democracy as it’s also called, can lead not only to simplistic bodges in response to complicated questions.

When pitched against representative Parliamentary democracy, it can also result in dangerous outcomes, as it did with the undefined version of leave ‘decided’ by ‘the people’.

Labour Prime Minister, Clement Attlee, was strongly against the use of referendums or ‘direct democracy.’ He famously said:

Conservative Prime Minister, Margaret Thatcher, agreed. She said that referendums are the “device of dictators and demagogues”.

And that’s precisely what’s happened with the EU referendum result. The answer, by the narrowest of margins, was a simplistic, undefined, unknown ‘Leave’, which was later interpreted any way the Tory government wanted.

A decision that our Parliament was not permitted to challenge – even though the referendum was supposed to be ‘advisory only’.

[See Who Made the Decision to Leave the EU?]

And so it is with Trump. He will now return to Twitter following a simplistic ‘referendum’.

As for the terms of Trump’s return, that will be down to Musk – the new demagogue on the block?

Brexit used to sit on the far side lines of politics. Indeed, the word ‘Brexit’ was only invented in 2012, and until the referendum, most people didn’t know what it meant. (Now it’s in the Oxford English dictionary.) An in-depth study by the Migration Observatory showed that: The volume of press coverage mentioning ‘immigration’ or ‘migration’ declined from 2006 […]

For most of the UK’s five decades as a member of the European Union, Britain didn’t want to leave. On the contrary, most Brits wanted us to stay. What’s the proof of that? Well, apart from polling over the years, look at governments and general elections. From 1959 to 2016, every UK government and every […]

So, Rishi Sunak has today been crowned the second ‘unelected’ Tory Prime Minister in as many months.  Is the country ‘Ready for Rishi’? Well, the country has no choice. The new Prime Minister has been anointed by just 194 Conservative MPs. We don’t get a say. Although in the UK we don’t directly elect a Prime Minister, […]

New British Prime Minister, Liz Truss, demanded that ‘no EU flags’ should be shown at the Prague meeting of European leaders on Thursday 6 October 2022. EU news website EURACTIV reported that the flags were kept away from the inaugural European Political Community summit at the demand of Ms Truss and the UK delegation. The […]

Britain’s Children’s Newspaper – subtitled, ‘The Story of the World Today for the Men and Women of Tomorrow’ – was a remarkable and mature publication for youngsters. On 8 October 1938, with dark clouds of war looming, the newspaper ran a visionary editorial describing Europe as ‘one Brotherhood’ with a ‘common interest which binds its […]

Prince Harry, Sir Elton John and Liz Hurley are among a group of celebrities suing the Daily Mail publishers, Associated Newspapers, for what they describe as “abhorrent criminal activity”. Their legal action claims they have “compelling and highly distressing evidence” that they have been “victims” of  “gross breaches of privacy by Associated Newspapers”. The group […]