One of my biggest frustrations on watching BBC TV’s ‘Question Time’ is that when UKIP representatives make incorrect statements about the EU, there’s usually nobody on the panel or in the audience to correct them.

Take last Thursday’s broadcast of Question Time. Among those appearing on the panel was UKIP MEP, Patrick O’Flynn, who made a number of statements about the European Union that were wrong.

As I discovered, shouting at the telly made not a blind bit of difference. He carried on regardless, without anyone in the studio able or willing to put him right.

So instead, I’ll share with you here on my ‘EU ROPE’ blog three examples of Mr O’Flynn’s misleading statements on Question Time and explain how they were wrong.

“On the flooding it turns out that there are regulations from the EU that stop us dredging the rivers that have arguably made the flooding worse.”

UKIP has been trying to blame the EU for Britain’s flood disaster. This is completely without foundation.

The anti-EU party, along with some of the media, have claimed that the EU Water Framework Directive ‘bans dredging’. But that’s not true; the directive doesn’t ban dredging.

Whether or not to dredge is a decision of each member state, not the EU, and based on the local situation. The UK Environment Agency recently announced that it had spent £21m on dredging in the past two years, so clearly, dredging hasn’t been banned at all.

It’s also been claimed that the EU directive prevents dredged sediment being spread elsewhere. Again, this isn’t correct, unless the sediment contains toxic substances, in which case dredging could poison land and rivers endangering the health of humans and wildlife.

Experts have commented that dredging can sometimes be an effective measure against flooding, but sometimes it can make matters worse. It’s up to our UK government agencies to decide whether to dredge, and not the EU.

Furthermore, the EU has emergency funding of about £125 million to help Britain’s flooded areas. So far, the British government has turned down this fund, with the Prime Minister, David Cameron, claiming that Britain can afford to deal with the flooding from ‘our own resources’.

“You can’t sack the European Commission. It’s unelected. We’re not a democracy.”

This is also incorrect.

We elect MEPs to represent Britain in the European Parliament; it’s nonsense to claim this is not democratic.

The European Commission comprises 28 Commissioners, one from each EU member state, appointed every five years.

The President of the Commission is decided by a majority vote of the democratically elected heads of each EU member state, which of course includes the UK.

However, the choice of Commission President has to be agreed by a vote of the European Parliament, which can reject the candidate for President.

Once Parliament has democratically approved the appointment of the EU Commission President, the President-elect selects the 27 other EU Commissioners, on the basis of suggestions made by each EU member state, including of course the UK.

However, EU Parliamentary committees assess the suitability of each proposed Commissioner.

In fact, the European Parliament has the democratic power to sack the entire Commission of the European Union at any time during its 5-year tenure. This is the same as national governments that can be booted out of office by national Parliaments if they lose a vote of confidence.

The European Parliament is one of the world’s largest democratic assemblies, representing over 500 million citizens.

The Parliament has elected representatives from all the main political parties in Europe – conservatives, socialists, liberals, greens, variants of the extreme left and extreme right, as well as anti-EU parties, such as UKIP.

I have visited both Parliaments of the EU, in Brussels and Strasbourg, and witnessed democracy at work by hard-working elected MEPs. It’s an insult to them, and to all of us who voted in the European elections, to suggest that the EU is not democratic.

The EU is not quite the same as our democratic system in the UK, but the European Union is still a democracy none-the-less. It’s not perfect, but there is no perfect democracy in the world.

In the UK, we don’t get to vote for who sits in the Cabinet or holds ministerial positions. We don’t directly elect our Prime Minister. We don’t elect our Civil Service. We have an unelected second chamber, and an unelected ‘head of state’.

To paraphrase Winston Churchill, “Democracy is the worst form of government, apart from all the others.”

Over the past few decades, however, much more democratic power has devolved to the European Parliament, and I hope this ongoing process of democratisation will continue in the years and decades to come.

Only one-third of the British electorate actually vote in the European Parliament elections. Maybe that’s why so many might wrongly believe Mr O’Flynn’s claim that the EU is not democratic.

“The Governor of the Bank of England is admitting that untrammelled freedom of movement for working class jobs has caused massive wage compression over ten and fifteen years for working people in this country.”

The Governor of the Bank of England, Mark Carney (himself a foreign worker) didn’t say anything of the sort.

Let me be frank about this: Mr Carney did not say migrant workers bring down the salaries of existing British workers. In fact, Mr Carney has strongly praised ‘free movement of people’ as being good for Britain and Britons.

But Mr Carney replied, “I would really dampen down that explanation.”

He explained that most of the increase in labour supply has been down to British workers taking more hours, and older workers staying in employment. Over the last two years, increases in those factors have been 10 times as important as migration, Mr Carney asserted.

Contrary to the implications made by Mr O’Flynn on Question Time, the Bank of England Governor has consistently supported Britain’s continued membership of the EU.

In a lecture last October, Mr Carney said Britain’s membership of the EU since 1973 had improved the dynamism of the economy and increased the prosperity of all people in Britain.

Mr Carney added that “the UK is the leading beneficiary” of the free movement of goods, services, capital and labour enshrined in European treaties.

Furthermore, Mr O’Flynn’s description of ‘free movement of people’ across Europe as “untrammelled” is also misleading.

There is not “untrammelled” free movement of people. Yes, as EU citizens we have a right to live, work, study or retire in any other EU/EEA countries. But under EU rules, we cannot just move to another EU country unless we have the means to look after ourselves.

It’s a myth to suggest that it’s possible for EU migrants to come here, or for British migrants to go to another EU country, and immediately start claiming benefits. It’s only free movement if you can afford to move.

I managed to get through to the James O’Brien phone-in show on LBC radio. James asked me, “Jon, have you changed your view as a result of this sparkling re-negotiation presided over by our wonderful Prime Minister, David Cameron?’ (4 minutes) 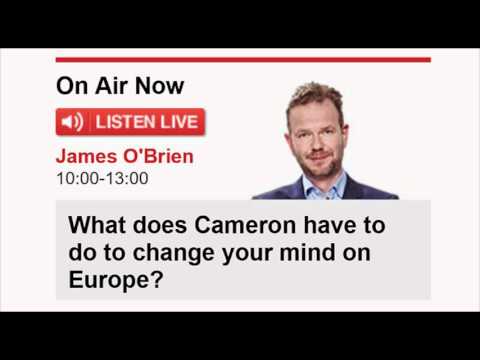