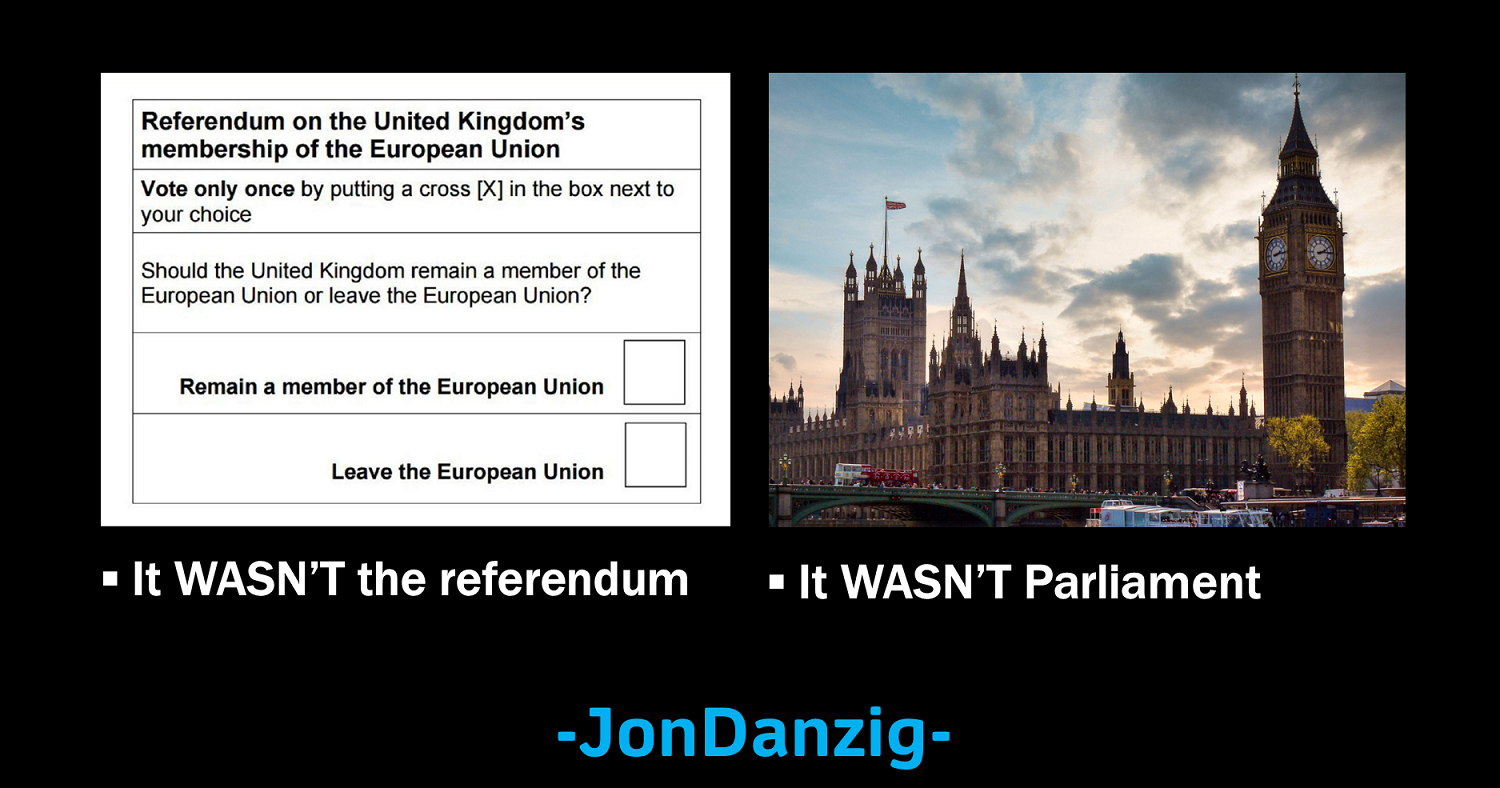 So, here’s THE key question: Who made the decision for the UK to leave the EU?

It wasn’t the referendum. The referendum, as agreed by Parliament, was advisory only and not legally capable of making any decision. This was confirmed by the Supreme Court, who also ruled that the decision to leave the EU had to be taken by Parliament.

But Parliament didn’t make the decision either.

Following the referendum, there was no debate or vote by MPs on the specific question of WHETHER Brexit should go ahead. The then Brexit Secretary, David Davis, erroneously told Parliament in January 2017 that a Parliamentary decision wasn’t necessary, as ‘the decision’ to leave the EU had already been taken by the referendum.

A ‘decision’ that the Supreme Court ruled was not capable of being made by an advisory referendum. And remember, the Supreme Court ruling came about – thanks to Gina Miller’s successful legal challenge – because Theresa May’s government had wanted to implement Brexit without ANY approval of Parliament.)

Mr Davis advised Parliament that, since the ‘decision’ to leave the EU was already made, all that Parliament was required to do was to give the Prime Minister authority to notify the EU of an ‘intention’ to leave. An intention is not a decision. It is not even binding.

In January 2017, Parliament was presented with one of the shortest bills ever, ‘The European Union (Notification of Withdrawal) Bill’. The Bill simply stated:

Significantly, this Bill did not include or agree the content of the Article 50 notification letter that Theresa May later unilaterally composed and sent to the EU. When Parliament passed the Bill to give power to Mrs May to notify the EU of an intention to leave, the world was led to believe that Parliament had voted to leave the EU.

Nothing of the sort had happened. To repeat: Parliament never actually debated and voted on the specific question of whether the UK should leave the EU.

▪ WHO MADE THE DECISION TO LEAVE?

So, since the referendum couldn’t make a decision to leave the EU, and Parliament didn’t make the decision, who did? That mystery was unravelled in June 2018, at a ‘permission hearing’ in the High Court regarding the validity of Article 50.

That hearing established that the Prime Minister, Theresa May, EXCLUSIVELY AND INDIVIDUALLY made the executive decision for the UK to leave the EU. Lord Justice Gross and Mr Justice Green unusually made their judgment citable and ruled that the decision to leave the EU was contained in the Prime Minister’s Article 50 notification letter of 29 March 2017, to Donald Tusk, the then President of the European Council.

In that letter, Theresa May stated that ‘the people of the United Kingdom’ had made ‘the decision’ to leave the EU, even though the Supreme Court had ruled that the referendum was advisory only and not legally entitled or capable of making any decision. She also erroneously advised Mr Tusk in her letter that ‘the decision’ to leave the EU had been ‘confirmed’ by the United Kingdom Parliament.

To repeat: Parliament had only given the Prime Minister permission to give notice to the EU of an ‘intention’ to withdraw from the EU. That’s not at all the same as a specific decision to leave.

Under the EU treaty, a member state giving notice under Article 50 must do so in accordance with its constitution. But the UK doesn’t have a written [codified] constitution, and the fact that the referendum was advisory only muddled the entire exercise.

It’s unlikely that the written constitutions of other EU member states would have permitted a Brexit with the support of just 37% of the electorate. Our Parliament was refused an opportunity to specifically debate and vote on whether the country should leave. Brexit was presented as a fait accompli. On this basis alone, it could be argued that the EU should not have accepted the Article 50 notice as valid.

It’s perhaps understandable that the EU would not have wanted to challenge Britain’s ‘decision’ to leave the EU, even though on the face of it the decision was flawed. But the Opposition – Labour – could have challenged the flawed process whereby Britain was to leave the EU on the say-so of a mere 37% of the electorate and in a referendum which was only won with the use of lies and illegalities on a shocking scale.

Labour could have taken legal action to challenge the process, right through to our Supreme Court and the European Court of Justice. Instead, they complied with the flawed process and backed it, making it difficult for them to complain about it later.

▪ WHAT SHOULD HAVE HAPPENED?

Had Parliament been asked following the advisory referendum to debate and specifically vote on whether the UK should leave the EU, a bill to this effect would have required a plan, impact assessments and evidence from all the Brexit committees.

The question put to Parliament following the referendum SHOULD HAVE BEEN the same one that the UK electorate was asked: ‘Should the United Kingdom remain a member of the European Union or leave the European Union?’

Asking Parliament instead if it will give permission for the Prime Minister to notify the EU of an ‘intention’ to leave was not at all the same as a debate and vote on whether the UK should remain or leave. Parliament only ever debated and voted on the terms of leaving the EU, but never on whether we should leave.

In reality, it was Theresa May, as Prime Minister, who ALONE made ‘the decision’ to leave the EU, a decision inherited and adopted by the next Prime Minister, Boris Johnson.

Boris Johnson went ahead and ‘Got Brexit Done’. He negotiated the terms of leaving the EU, and Parliament voted to accept them. But again, Parliament didn’t vote on whether we should leave; it was always assumed that the decision had been made by the referendum, even though the referendum was decided by an Act of Parliament to be an advisory poll only.

Brexiters claim that even if the referendum was advisory only, the general election of 2019 gave Mr Johnson a democratic mandate to go ahead with Brexit. There is merit in that argument, but it needs to be looked at in perspective.

In the general election of 2019, most voters did NOT vote for the Tories. Most voters in that general election voted for parties that wanted to offer a new referendum on Brexit. The Tories only won their landslide 80-seat majority with just 1% more votes than they got in the 2017 general election, in which the Tories lost their majority entirely. Something is clearly wrong with our archaic system of voting, that returned a result not representative of the nation.

Polls strongly indicated that if 12 December 2019 had been a referendum, instead of a general election, Remain would have won. Furthermore, the electorate wasn’t given a democratic opportunity to agree on the terms of leaving the EU. In the 2016 referendum, ‘Leave’ was not defined. The country was denied a second referendum to approve the version of Brexit that we have now ended up with.

It’s not only a Public Inquiry on Covid-19 that the country deserves. We also urgently require a Public Inquiry on Brexit. Such an inquiry would need to investigate how Brexit went ahead despite only a small minority of the total electorate voting for it (just 37%), in an advisory-only referendum, and without the specific and explicit approval of Parliament following the referendum result.

The inquiry would also need to investigate how the Leave campaigns won – by the slimmest of margins – through lying, cheating and law breaking. In the referendum, all the reasons given to leave the EU were based entirely on incorrect and untrue statements.

And so, here’s the final rub. If the referendum had been a legally binding vote, then under UK law, the serious illegalities and irregularities that took place would almost certainly have resulted in the referendum result being annulled by the courts.

But as the referendum was an advisory exercise only, it escaped such legal scrutiny – even though after the referendum, the result was treated by the government as if it was legally binding. The courts cannot annul an advisory vote in the same way that a legally-binding vote can be annulled when serious irregularities may have affected the result.

Do you get the feeling that the country has been conned on an enormous scale?