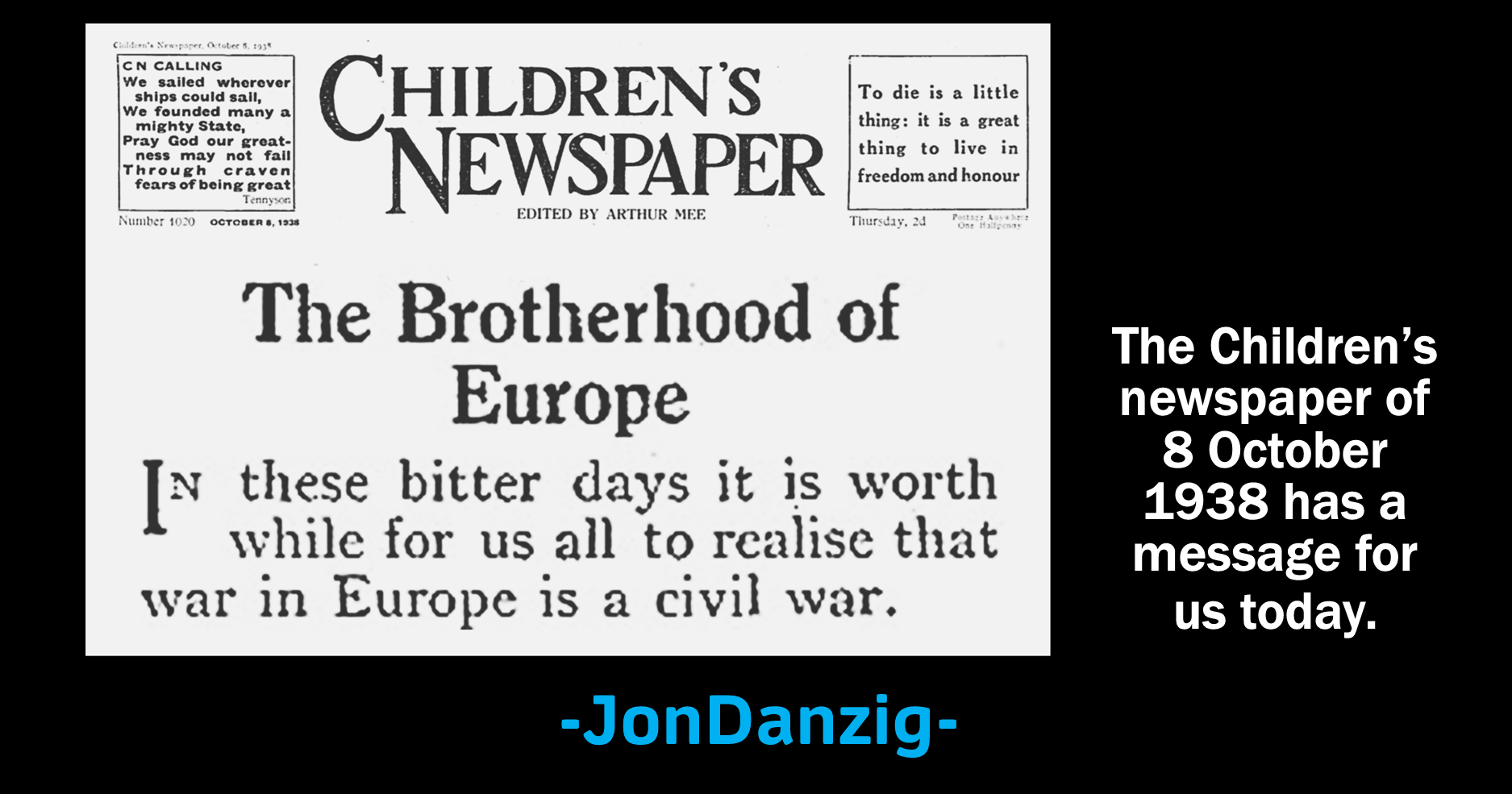 Britain’s Children’s Newspaper – subtitled, ‘The Story of the World Today for the Men and Women of Tomorrow’ – was a remarkable and mature publication for youngsters.

On 8 October 1938, with dark clouds of war looming, the newspaper ran a visionary editorial describing Europe as ‘one Brotherhood’ with a ‘common interest which binds its people together’. One year later, a vicious world war ripped Europe apart, from which it took over 60 years to recover. The lesson then, just as relevant today, is that ‘The Brotherhood of Europe’ should never be broken. Our strength is being united and together.

Britain broke that unity by going ahead with Brexit. It estranged us from the mainland of our continent and gave Russia’s Putin a helping hand with his nefarious, imperial, and dictatorial intentions.

Now, with war raging in Ukraine, dark clouds are once again looming over Europe. What have we learnt?

This is an extract from the Children’s Newspaper of 8 October 1938. It’s a message for today.

IN THESE BITTER DAYS it is worthwhile for us to realise that war in Europe is a civil war.

All Europe is one Brotherhood. Apart from the hate fostered by Dictators for their own purposes, Europe is the home of a great family of people who wish to be left alone to enjoy the treasures with which the Continent is crowded from end to end.

We only have to look round for a moment to realise what the Brotherhood of Europe really is.

One of the most effective instruments of social government in these perilous years is the Labour Exchange, which keeps an army of idle people off our streets, an asset of a good and safe society which we owe to Germany. So to the old Germany we owe the example of some of the wisest elements in our social life – the movements for the better housing of the people, for the better planning of our towns, and for the insurance of the industrial population.

The truth is that Europe is international, its countries sharing a life that is common to all.

The great monuments of people –

– all these foundations of prosperity in Europe are from no one country in particular, but are the common products of many or all.

The greatest treasure of Europe is, indeed, the common interest which binds its people together in bonds stronger than steel, which must endure after these dark days have passed.