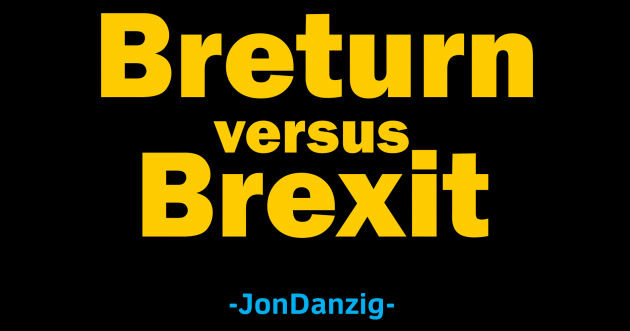 Brexit is based on blatant mistruths and lies.

In the EU, we had a direct say, votes, and vetoes on the running and future of our continent. Now, no more.

Outside the EU, Britain can only look on as decisions about our continent are made without us – even though those decisions affect us just as much, whether we’re a member or not.

Shout it loud. Brexit means losing sovereignty, not gaining it.

Really? Just think about it.

Britain needs millions of migrants because we have millions more jobs than Britons to do them. It’s as simple as that.

But because of Brexit, we now have a record 1.3 million job vacancies that we don’t have enough workers to fill.

The truth? We need migrants to do jobs just as much as we needed them before Brexit. Nothing changed.

Migrants come for jobs, and if there are no jobs, they mostly don’t come or don’t stay.

Migrants do not, and cannot, come for benefits. Most migrants in Britain are in gainful employment, making a massive NET contribution to our Treasury, economy, and society.

But making it more difficult for citizens from neighbouring countries to work here offers no benefits to Britain at all.

Britain has a chronic shortage of skilled workers. With fewer EU citizens, we now have fewer builders, teachers, doctors, and nurses.

▪ GET OUR COUNTRY BACK?

We never lost it.

If being in the EU means losing your country, why aren’t the 27 other EU member states planning to leave?

Really, none of them are – support for the EU is the highest it’s been in 15 years, and other European countries want to join, NOT leave.

Most laws in the UK are our laws, passed by our Parliament, otherwise it would have nothing to do.

But in the EU, we benefited from laws and regulations for our continent that no single European country alone could ever achieve.

And EU laws were never imposed on us; they were our laws because Britain democratically agreed to those laws.

Every EU treaty was fully debated and democratically passed by our Parliament in Westminster.

▪ THE EU IS RUN BY FACELESS BUREAUCRATS?

The EU is a democracy, run and ruled by its members, the 27 countries of the EU, along with its democratically elected European Parliament.

All EU laws are democratically decided by elected politicians.

The European Commission is the servant of the EU, not its master, and the European Parliament has the power to democratically choose, and dismiss, the entire Commission.

That’s hardly surprising. All the reasons to be an EU member are based on true, tangible, and tested benefits over many decades.

EU membership is profitable – in real terms it cost Britain nothing to belong to the EU.

On the contrary, we got back many times the cost of the annual membership fee. Being in the EU made us better off.

Whilst NATO has protected us from external threats, its’s the structure of the EU that has helped to create peace between its members.

That’s an enormous achievement for a continent that was previously used to violence, wars, and subjugation as the way for European countries to ‘settle’ issues.

In 2012, by a unanimous decision of the Norwegian Nobel Committee, the EU won the Nobel Peace Prize for advancing the causes of peace, democracy, and human rights in Europe for over 60 years.

The EU gives members freedom across much of our continent.

EU citizens enjoy the right to live, work, study or retire in any EU or EFTA country – including access to state healthcare and education when working in those countries. That’s a precious right, that took decades to achieve.

The loss of these freedoms has proved devastating for Britain and Britons.

Almost half of ALL our exports, and just over half of ALL our imports, go to and come from the EU. Nowhere else in the world comes even close. That’s as true AFTER Brexit as BEFORE.

Putting up barriers to trade with our most important export and import market in the world – right on our doorstep – was complete and utter madness.

The EU is the world’s largest and most successful trading bloc, and the world’s biggest exporter and importer of manufactured goods and services.

The Euro, in record time, has become the world’s second most traded and trusted currency, next to the US dollar.

Outside the EU, Britain simply can’t get trade deals as good as, let alone better than, the free trade agreements we had as an EU member.

For example, 4-weeks paid holiday a year; the 48-hour working week; anti-discrimination law; guaranteed rights for agency workers; guaranteed worker consultation – all these protections, and many others, largely exist because of the EU.

No single national government can assure safety and protection across our continent.

It needs the reach of a pan-European intergovernmental organisation to achieve that (albeit with the democratic consensus of member states).

In a world dominated by the USA, China and Russia, Britain is dwarfed on its own.

Being part of the EU gives us a bigger say and more strength on the global stage than as a small country out-at-sea and going-it-alone.

Brexit means we are poorer, and with less sovereignty, fewer rights and protections, restricted trade, and diminished power.

The case for Breturn – Britain returning to the EU as a full member – is overwhelming. It may take years to achieve a democratic reversal of Brexit, but it’s a worthwhile fight.

Rejoiners can win next time. We just have to ensure we get a next time.

The Conservatives used to be the party of Europe. Their greatest war leader, Winston Churchill, was a passionate proponent of the “union of Europe as a whole” as the way to create lasting peace on our continent. Although he didn’t at first envisage the UK joining this union – because we already had our Empire […]

There are now calls for the EU referendum to be scrapped and run again. It follows the Electoral Commission’s ruling that Vote Leave, the official Brexit campaign group, significantly broke spending limit rules during the referendum. The group has been fined £61,000 by the electoral watchdog, which has also called for a criminal investigation. Former […]

Broken Britain | Boris Johnson: A dangerous clown | EU referendum broke ‘rules’ set by former Brexit secretary | The news changed and we got Brexit | What they want: The end of the EU |
Avatars by Sterling Adventures