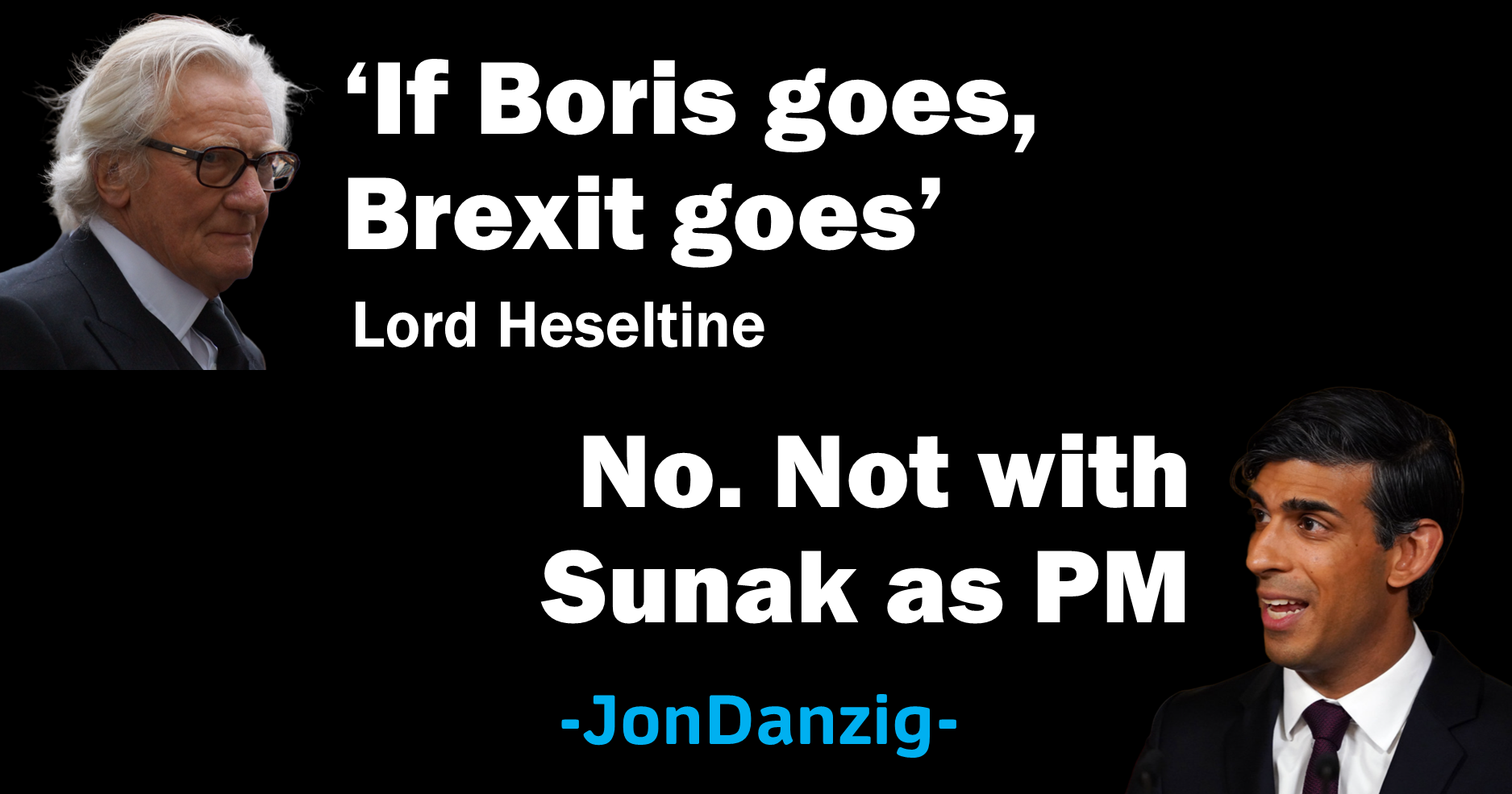 So, Rishi Sunak has today been crowned the second ‘unelected’ Tory Prime Minister in as many months.

Is the country ‘Ready for Rishi’? Well, the country has no choice. The new Prime Minister has been anointed by just 194 Conservative MPs. We don’t get a say. Although in the UK we don’t directly elect a Prime Minister, Mr Sunak will head yet another new Conservative administration, with a new manifesto, without a mandate from the country.

He says he’ll abide by his party’s 2019 manifesto prepared by his predecessor (bar one), Boris Johnson. But how can he?

None of that was covered in the Conservatives 2019 manifesto.

At the time, I wrote that this was nothing more than grandstanding, wishing thinking. And so, it’s turned out to be. Boris has gone. But Brexit is staying. With a new Prime Minister who’s a much bigger Brexiter than Johnson ever was.

No wonder that far right Brexiters of the Tory party support Sunak. In the referendum, Sunak argued for Brexit and supported Boris Johnson’s bus lie. He wrote for his website in February 2016:

Not so hot on maths then, is our ex-Chancellor.The UK never sent the EU £20 billion a year, and in any event, in real terms EU membership cost us nothing – on the contrary, it was hugely profitable for UK.

“I believe that appropriate immigration can benefit our country. But we must have control of our borders and we can only do that outside of the EU.

“As an EU member, every one of Europe’s 500 million citizens has a legal right to move here and there is nothing the UK government can do to limit those numbers.”

Oh dear. Doesn’t Mr Sunak know that Britain ALWAYS had control of our borders when an EU member? And all 500 million citizens of the EU would never move to the UK, because Britain would never have 500 million job vacancies – the primary reason for EU citizens coming here.

(Now we have a record number of job vacancies because EU citizens are NOT coming here.)

And Mr Sunak also said: “It can’t be right that unelected officials in Brussels have more say over who can come into our country than you.” Again, complete nonsense. The EU is run by elected politicians. And the UK Parliament democratically agreed to EU’s free movement of people.

“And that’s because despite the challenges in the long term, I believed the agility, flexibility and freedom provided by Brexit would be more valuable in a 21st century global economy than just proximity to a market.”

But erecting Brexit barriers to trade with our biggest, closest, and most lucrative export and import market (Europe) is directly damaging Britain’s growth and wealth.

In any event, it never had to be either/or. In the EU, we had both – trade with our neighbours, AND trade across the world.

So, here’s the bottom line. Boris Johnson has gone. But Brexit is staying.

And the new Brexiter in charge of Britain isn’t budging. Sunak won’t call for a new general election.

Sunak is a bigger Brexiter than Johnson | On International Women’s Day, remember the words of Hannah Arendt | The day England turned blue | Britain is naturally a pro-EU country | A low turnout today will favour Farage |