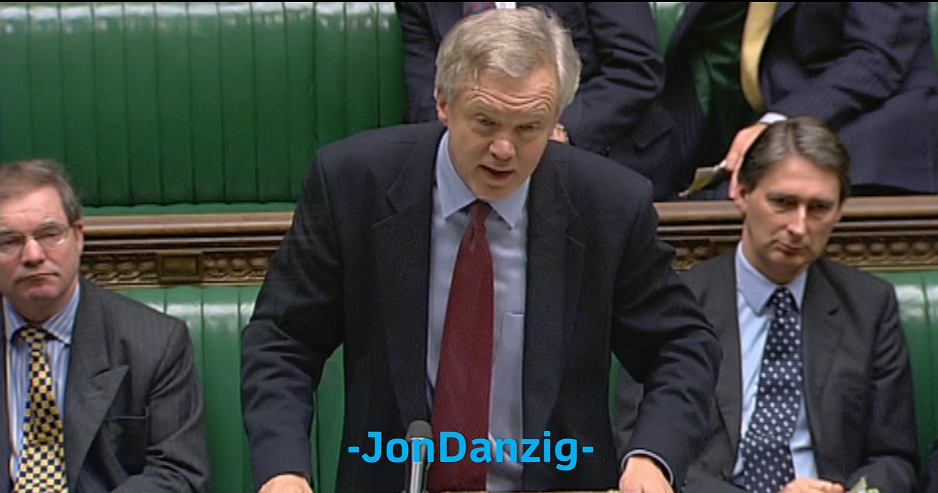 The EU referendum was entirely flawed according to criteria set by former Brexit Secretary and ardent Brexiter, David Davis, on how referendums should be “done properly”.

In July 2016, Tory MP, Mr Davis, accepted the result of the EU referendum and the dual-role of Brexit Secretary and Chief Brexit Negotiator in Theresa May’s new government.

But back in 2002, when the Tories were in Opposition to the Labour government, Mr Davis spelt out what he considered to be the gold standard for good referendums.

On the basis of that speech, the 2016 EU referendum failed on every point.

Mr Davis was opposing Labour’s plans to hold referendums on regional assemblies, because he considered that the structure of the proposed referendums would be undemocratic.

He detailed how referendums should be run to be valid. In summary, Mr Davis said that:

▪ “In a democracy, voters have to know what they’re voting for.”

But in the EU referendum, voters couldn’t know what they were voting for. The Leave option was not defined.

(This was also a point made by Philip Hammond, then Foreign Secretary, six months before the referendum. Mr Hammond was sitting next to Mr Davis when he made his speech in 2002. See video below).

▪ “The proposition has to come first, and the vote afterwards.”

But that’s not what happened in the EU referendum. There was no clear proposition before the referendum on how the UK would leave the EU and on what terms.

▪ “Referendums should be held when the electorate are in the best possible position to make a judgement.”

But in the EU referendum, the electorate was not in any position, let alone the “best possible position”, to judge whether the UK should leave the EU, and nobody knew then what the terms of leaving would be.

▪ Referendums should be held when the arguments, for and against, “have been rigorously tested.”

But in the EU referendum, the Leave arguments had not been tested, let alone “rigorously tested”.

Claims and promises made by the Leave side had not been debated or agreed in Parliament before the referendum took place.

▪ “Referendums should be held when people know exactly what they’re getting.”

But no one who voted for Leave knew what they were getting, let alone “exactly what they’re getting”.

▪ “This means that legislation should be debated by Members of Parliament on the floor of the House of Commons and then put to the electorate for the voters to judge afterwards.”

But the legislation to leave the EU was debated after the referendum and not before.

▪ “It does not mean that we ask people to vote on a blank piece of paper and tell them to trust us to fill in the details afterwards.”

But that’s exactly what happened with the EU referendum.

The Leave choice represented an entirely blank sheet of paper with government filling in the details much later and without a second, confirmatory referendum on whether ‘the people’ supported those details.

▪ A referendum should be “treated as an addition to the parliamentary process, not as a substitute for it.”

But the EU referendum WAS treated as a substitute for Parliamentary decision-making.

According to Mr Davis as Brexit Secretary, the final decision to leave the EU had been made by the referendum and was therefore a “point of no return”, even though the referendum was supposed to be an advisory poll only.

Parliament was denied any opportunity to specifically debate and vote on WHETHER the UK should leave the EU. The referendum was treated as a replacement for, and superior to, Parliamentary decision making.

“It is not a Bill about whether the UK should leave the European Union or, indeed, about how it should do so; it is simply about Parliament empowering the Government to implement a decision already made—a point of no return already passed.

“We asked the people of the UK whether they wanted to leave the European Union, and they decided they did.”

See the video below.

▪ “It’s important that referenda are not used simply as a snapshot of volatile changes of opinion, perhaps as a result of pressure of government propaganda.”

But the referendum ONLY represented a snapshot of “volatile changes of opinion” and certainly as a result of propaganda, much of which transpired to be untrue or incorrect or undeliverable. Much of the propaganda was fuelled and funded by Putin (see ‘The Russian Connection’ video below).

▪ “It’s because referenda are supposed to reflect the settled will of the people that we need to have thresholds below which they do not carry the day.”

But leaving the EU hardly reflected “the settled will of the people” let alone a stable or consistent will.

For most of the UK’s four decades as a member of the EU, most polls consistently showed that a majority supported membership.

Furthermore, the marginally close referendum result of 52%-48% could not reflect that “the settled will of the people” was to leave the EU.

As for a “need to have thresholds” for referendums, no threshold was set for the EU referendum, and only a minority of the electorate supported Leave, with the majority of registered voters either voting for Remain or not voting.

Although Mr Davis expressed varying views on what a threshold might be for a referendum, the EU referendum failed to have ANY threshold.

On 11 January 2022 I wrote to Mr Davis to ask him why, in view of the criteria he set in 2002 on how a referendum should be “done properly”, he could ever have considered the 2016 EU referendum and Brexit win to be fair and democratic? No reply has been forthcoming. You can write to Mr Davis at: david.davis.mp@parliament.uk