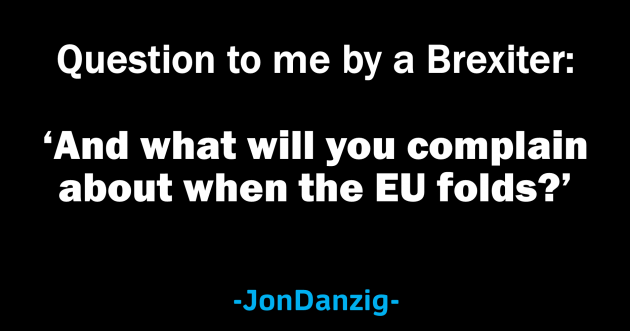 If the EU did not exist, it’s highly likely that the countries and continent of Europe would now be in a far worse situation.

For hundreds of years, European countries were more used to resolving their differences by violence, war, and subjugation.

There was no easy, let alone democratic, means to decide the running and future direction of our continent, as we have now through the EU.

As recently as the second half of the last century, Greece used to be run by dictatorial colonels.

Spain and Portugal were ruled by dictators.

Half of Europe was hidden behind an Iron Curtain.

Europe has come a long way since then – in great part thanks to the EU.

However imperfect is the EU, our continent was far more imperfect before it was founded.

The EU has brought peace and security between its member states, unprecedented in the long history of our continent.

And for that, the EU in 2012 was awarded the Nobel Peace Prize, for helping to

But the EU can only go as fast as its slowest member; it can only be as good as its worst member.

That’s the problem with all clubs, but the EU has achieved many good things – even if slowly sometimes.

The EU needs to be reformed, and members must be compelled to follow the rules they agreed to.

But for the EU to reform, it has to exist.

I worry that if it did ever collapse, Europe would go back to its old ways – and those ways led to war, and the Holocaust.

Unlike the Nazi or Communist regimes that preceded it, the EU values include:

The EU has democracy, human rights, and free market trade as the non-negotiable membership requirements for all members.

▪ THE NAZI regime was not a democracy, but a one-party dictatorship.

There were no human rights, or respect for life.

The Nazis ferociously bombed and bludgeoned our continent into submission.

Tens of millions were brutally and systematically murdered on an industrial scale.

▪ THE USSR was not a democracy, but a one-party state.

There were no human rights, or respect for life.

There was no free market, but a state controlled one.

Member states of the Soviet Union were forced to join, under threat of violence that was often used to enforce any member state that didn’t comply.

No countries caught up in the Soviet sphere of control were free to leave, until the Soviet empire itself collapsed.

(And frankly, what’s really changed since the collapse of the USSR? Russia has invaded Ukraine. An EU country doing that to another EU country would be absolutely unthinkable. It would not happen and, more to the point, it has never happened).

▪ BY CONTRAST, the EU was established as the antidote to war and hate.

Far from being a one-party state, the European Union is made up of many elected governments, and elected MEPS, from right across the political spectrum.

The EU is a democracy. It can only change with the unanimous agreement of all its member states.

Its laws, aimed to protect almost half-a-billion citizens, are all democratically agreed.

The EU is the world’s most successful peace project in the history of our planet. We need to cherish and protect it.

Yes, the EU is flawed – as is every organisation run by humans. But the aim should be to improve it, not dismantle it.

Brexit laid bare | Putin's fingerprints are all over Brexit | Back to the USSR? | Don't blame voters for Brexit | Broken Britain |

Europe is better with the EU than without | Boris Johnson: A dangerous clown | EU referendum broke ‘rules’ set by former Brexit secretary | The news changed and we got Brexit | What they want: The end of the EU |