That basically sums up those Tories who supported Remain in the referendum but then switched to Leave.

They didn’t give much of an explanation for doing so, except to say it’s what ‘the country voted for’.

But Brexit went ahead on the say-so of a mere 37% of the electorate – hardly representative of ‘the country’. 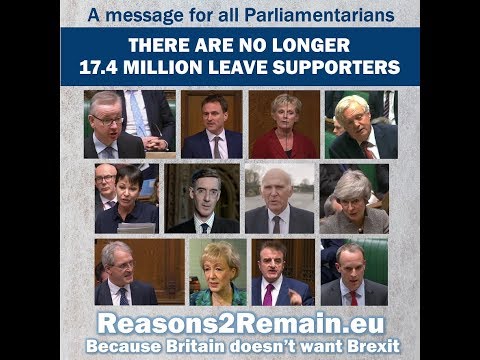 In the Christmas general election of 2019, most voters didn’t vote for the Tories. Most voters voted for parties that wanted another referendum on Brexit.

There is compelling evidence that had the general election instead been a confirmatory referendum, the country would have strongly voted to Remain in the EU on the terms we still then enjoyed.

At least the current Tory cabinet is mostly made up of Tory Brexiters.

It used to be the other way around; most Tory MPs and cabinet members were Remainers, even after the referendum.

When Theresa May became Prime Minister after the Brexit vote, 70% of her cabinet had been in favour of EU membership.

They magically switched to becoming passionate Brexiters only after 23 June 2016.

Today we still have two-faced Tories.

In February 2016, just months before the EU referendum, Boris Johnson couldn’t decide whether to back Remain or Leave.

This, even though he solemnly promised the then Prime Minister, David Cameron that he would support the Remain campaign.

To hedge his bets, Mr Johnson prepared two entirely different articles for his regular column in The Telegraph – one backing Remain, the other backing Leave.

In the Remain column – which was withdrawn from publication at the last minute – Mr Johnson wrote that on balance he backed Britain remaining in the European Union.

His unpublished article rehearsed warnings that Brexit could lead to an economic shock, to Scottish independence and to further Russian aggression.

Although the future Prime Minister expressed misgivings about the deal Mr Cameron had negotiated with the EU, Mr Johnson implored:

‘Britain is a great nation, a global force for good.

‘It is surely a boon for the world and for Europe that she should be intimately engaged in the EU.

‘This is a market on our doorstep, ready for further exploitation by British firms: the membership fee seems rather small for all that access.’

Two days after writing that, Boris Johnson decided instead to back Brexit.

For the referendum, Liz Truss was a strong Remainer.

“Every parent wants their children to grow up in a healthy environment with clean water, fresh air and thriving natural wonders.

“Being part of the EU helps protect these precious resources and spaces.”

But immediately after the referendum, she transitioned into being an ardent Brexiter, which apparently has impressed Mr Johnson.

Sajid Javid backed remaining in the European Union during the referendum and was a member of the official ‘Britain Stronger in Europe’ campaign.

“If we leave the EU, small firms are on the front line and that’s a gamble with people’s livelihoods I’m not willing to take. Small businesses are the backbone of our economy.”

Before the referendum, he penned a blog for his website stating:

“One of the advantages of EU membership is that we get to negotiate wider and deeper trade deals from a position of strength.

“If we leave, the boot will be on the other foot – and that will put Britain at a serious disadvantage.

“I’m not about to vote for a decade of stagnation and doubt.”

That blog has now been removed and, following the referendum, guess what? Mr Javid became an ardent Brexiter.

He told the Financial Times:

He also insisted that British companies outside the EU would flourish and that his guiding mantra for the post-Brexit economy would be “human capitalism”.

Oh, and he said, ‘No, no, no!’ to a second referendum. (Yup, he could change his mind, but heaven forbid allowing voters to do the same).

Grant Shapps wrote for Brexit Central after the referendum:

‘I was a Remainer, but I have embraced the new direction of the country. I am backing Brexit all the way, as hard as you like, and I’m bullish about the UK’s future.

‘Becoming the world’s greatest free-trading nation is a vision in which I can believe.’

He argued against extending the Article 50 notice period because that would only lead to a second referendum.

Before the referendum, the then Mr David Frost strongly backed Remain. He said then:

“Our interest is to be part of the biggest possible market with the fewest possible barriers. The European Single Market gives us that.”

He is now Britain’s Mr Brexit and recently said that the country “elected” to have Brexit and that “we’re very confident that we will benefit from it.”

Oh, one thing to point out: Although Lord Frost is a government minister who sits as a full member of Boris Johnson’s cabinet, he is not elected.

Before the referendum, Oliver Dowden supported Remain. But afterwards? Well, I think you already know.

In his own words:

“I campaigned for Remain, but the British people voted to leave the EU and ever since that moment I have always sought to respect that.

“In voting to leave the EU, people voted to control our own laws and our own regulations so it would not be acceptable to be in this position whereby if the EU decides to change its rules, we have to match or face some kind of trade consequences.”

Oh, and no second referendum, said Mr Dowden, who is now ‘Minister Without Portfolio’ as well as being co-Chairman of the Conservative Party.

Believe it or not, before the referendum, from 1957 onwards, all Tory governments and Prime Ministers were pro-EU.

Indeed, without the Conservatives the UK might never have applied to join the European Community or become a member.

But those EU-supporting Tory MPs have now either disappeared, been kicked out, or transitioned to the Leave side.

Can we even call them Conservatives anymore?