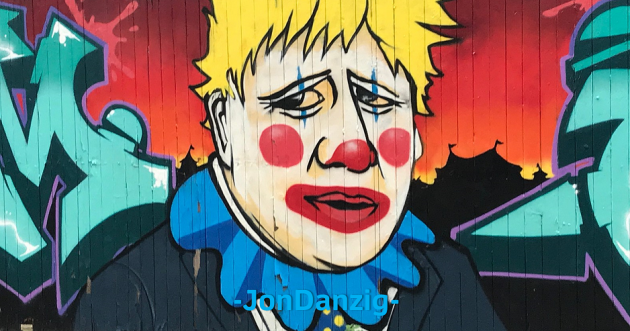 I would say instead that Boris Johnson is a completely dangerous clown, and nothing he’s done for the country is at all likeable.

Angela Rayner, the deputy Labour leader, questioned the seriousness of Mr Johnson and his new chief of communications. She said:

“Did I mention that there are no serious people left to serve? They think it’s all just one big joke, don’t they?”

For sure, he likes to have – or more accurately, to get – a laugh.

But how appropriate is that when the country is reeling from the devastating consequences of Brexit, the impact of Covid, the danger of Climate Change, and on the imminent horizon, the possibility of war between Russia and Ukraine?

They say we get the politicians we deserve. But do we really deserve a Prime Minister like Boris Johnson, who tries to make fun of everything?

He and his party are having a good laugh at our expense.

People say that Boris Johnson reminds them of Benny Hill. He looks the part – especially when he can’t be bothered to dress properly.

But this is serious.

Our country is being commanded by a clown. Britain is now the laughing-stock of the world.

Behind the jokes, the laughter, the faux joie de vivre, however, is something truly sinister.

Britain is being led to ruin.

Brexit isn’t working. Trade with our neighbouring countries – our most important export and import market in the world – is severely disrupted.

The situation in Northern Ireland as a result of Brexit is close to collapse, with the Good Friday Agreement in danger of falling apart.

For sure, business is suffering from both Brexit and Covid. “F*** business,” retorted the minstrel Prime Minister.

Beware. The jokes hide the lies and the real game.

The fiddlers – our political masters – are steeped in sleazy, corrupt, and nefarious activities.

Whilst the front man elicits guffaws from the electorate, those behind the scenes are furtively dismantling what was once Great Britain, taking what they can, increasing their power, reducing our democracy.