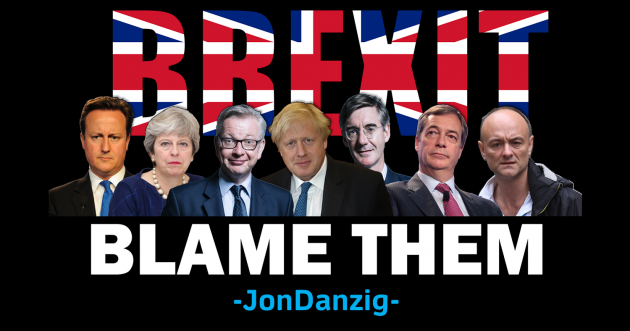 ‘Just over half of those who voted bought manky lies dressed up as a better life after Brexit. They were told they’d get their country back. Their lives would be transformed.

‘They were duped. They were deceived. They were sold a dodgy time share by cowboy politicians, who made claims and promises they can never deliver because it was all a delusion.

‘Those conned voters, when they realise they’ve paid dearly for faulty merchandise, will need support and direction. The rogue politicians will need to be kicked out.

James O’Brien on LBC has consistently agreed with this line; blame politicians, not voters, he implores.

In a broadcast two years ago he said:

It’s the same message I posted just a few hours after the referendum result, but now of course, it’s almost six years later.

Today, we are all rapidly realising that politicians must own and take full responsibility for the horrific, catastrophic mess that Britain has got into as a direct result of Brexit.

▪ DAVID CAMERON – the Prime Minister who called for an unnecessary referendum not for his country, but as he confided in Donald Tusk, “only for his party”.

He then led an inept, lacklustre referendum campaign that was so appalling that anyone would think he wanted to lose.

▪ BORIS JOHNSON – the Prime-Minister-wannabe who used to be a Remainer, but then at the last minute, switched sides to be the Brexit poster-boy, as he thought that would be his best route into 10 Downing Street (he was right).

To win, he lied on a colossal scale – the biggest deceit being his claim that Britain sends £350m a week to the EU, that could instead be spent on the NHS.

▪ MICHAEL GOVE – another PM-wannabe, who also lied to win, telling the nation that EU migration in the decade following the referendum could be as high as 5 million.

But it was based on another lie – that Turkey would be joining the EU soon, which Gove must have known was impossible.

▪ NIGEL FARAGE – the on-off-on-off UKIP leader who introduced the nation to raw racism, turning Britons against EU citizens living here who were actually helping our country to thrive.

He called for racial discrimination laws to be scrapped, and said he wanted not just Brexit, but the end of the entire EU.

▪ THERESA MAY – another former Remainer who changed sides so she could put her career before country. In other words, she wanted to be PM more than she didn’t want Brexit.

She over-interpreted the referendum result, ignoring that almost half of those who voted didn’t want Brexit.

▪ JACOB REES-MOGG – the upper-class MP with the honed posh-voice who promoted Brexit pretending it would benefit the poor, whereas in reality, it’s only some of the rich who are prospering from it.

On the one hand he claimed Britain had no real power in the EU, then called for Britain to be “as difficult as possible” if there was a long extension to our membership.

“We could veto any increase in the EU budget,” he claimed and “obstruct” an EU army and “block” Mr Macron’s “integrationist schemes”.

Rees-Mogg did, however, say that it could take “50 years” to reap the benefits of Brexit. What a useful get-out clause…

▪ DOMINIC CUMMINGS – the unelected Svengali-style string-puller who masterminded the Leave victory all based on lies, mistruths and false promises.

He is the man who gave Britain Brexit.

His primary insight was to weaponise unregulated social media.

Of course, in their day, the Nazis were ahead of the curve in their use of broadcast media, but Cummings didn’t add anything that Goebbels didn’t know.

There are many other politicians who must take full responsibility for Brexit.

Remember this: most voters in Britain didn’t vote for Brexit – Leave was only supported by 37% of the electorate.

That would not be enough for Leave to have won in most democracies across the world that hold referendums, where at least 50%, and often at least 60%, of all registered voters would be required before such a big change could happen.

It wouldn’t even be enough, under Tory legislation, for a trade union to call a strike, which requires the support of at least 50% of all its members before a walk-out can go ahead.

What’s more, in the general election of 2019, most voters did not vote for the Tories; most voters voted for parties that wanted another referendum on Brexit.

The Tories only won their landslide 80-seat majority with just 1% more votes than they got in the 2017 general election, in which the Tories lost their majority entirely.

Johnson got his 80-seat majority with the votes of less than 30% of those eligible to vote.

Our system of politics and voting is broken and unfit. It’s allowed a result that the country at large didn’t, and doesn’t, want.

What a cunning, clever, coup this has been.

The bottom line: Blame politicians, not voters, for Brexit. We can do without lying politicians. We can’t win without voters.

Brexit laid bare | Putin's fingerprints are all over Brexit | Europe is better with the EU than without | Back to the USSR? | Broken Britain |

Don’t blame voters for Brexit | Boris Johnson: A dangerous clown | EU referendum broke ‘rules’ set by former Brexit secretary | The news changed and we got Brexit | What they want: The end of the EU |